Message to Congress: Stop Monkeying Around with Conservation Budgets 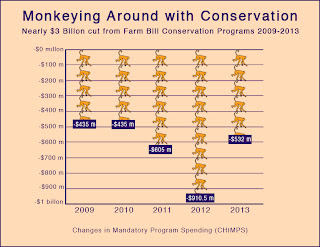 This summer the House and Senate are rewriting the Farm Bill, which Congress last year kicked down the road. The 10-year price tag will total nearly a trillion dollars, funding food stamps, agribusiness subsidies, conservation, and research. Budget cutters are searching for billions of dollars to slash, and Farm Bill conservation programs, once again, seem vulnerable.

This is real cause for concern. Established in response to the overplowing that led to the Dust Bowl, conservation programs are intended to compensate landowners for vital work that the free market does not value: soil protection, wetland and grassland preservation, water filtration, pesticide and fertilizer reduction, carbon sequestration. Safeguarding natural resources in a time of rising temperatures and more violent weather events are crucial investments in public health and national security.

Of all agriculturally-related federal spending, conservation programs can offer the public the biggest return for the taxpayer dollar. They can expand the availability of organic and pasture-raised foods, help farmers reduce runoff that harms public waterways, promote soil-enhancing practices like cover cropping and field rotations, and protect farmland and wildlands for future generations.

Unfortunately, most members of Congress, including many influential members of the House and Senate Agricultural Committees, don’t understand the devastating toll that six decades of Farm Bill subsidized factory farming methods has taken on the land—or the power of conservation programs to reverse them.

Adding insult to injury, those conservation programs that do exist rarely get the money they are promised when Farm Bills are passed. Legislators make a big deal about how the Farm Bill protects the environment. But whenever budget appropriators need savings, conservation programs are the first on the chopping block. There’s a term for this: Changes in Mandatory Program Spending, or CHIMPS.

Over the last five years, Conservation budgets have been CHIMPed by more than $3 billion, with nearly $2 billion in cuts between 2011 and 2013 alone. That’s not because there’s no demand for the programs. Three out of four applications are turned away for lack of funding.

Even common sense on-farm stewardship practices that were historically required of farm subsidy recipients are disappearing from the Farm Bill. Take taxpayer funded crop insurance. Over the past five years, subsidized crop insurance has become farmers’ preferred source of taxpayer assistance. Crop insurance policies currently come with no land conservation requirements. Because of this, they are actually causing a massive amount of previously protected land to be plowed up. Farmers anxious to cash in on record crop prices no longer have to worry about yields when taxpayer programs guarantee them against losses. Across the Great Plains, corn and soybeans are being planted on millions of acres of erodible lands that were previously deemed marginal and formerly protected through the Conservation Reserve Program. Scientists fear another Dust Bowl is in the making.

“Congress right now has the ability and responsibility to transform the Conservation Title for the next 10 years,” says Oregon Representative Earl Blumenauer. In May, Blumenauer introduced HR 1890, the “Balancing Food, Farms and Environment Act of 2013.” The bill is just one of many intended to strengthen conservation efforts into the House and Senate Farm Bills, which should come to floor votes this summer. A Coburn-Durban amendment is aimed at imposing income thresholds on crop insurance for the largest farmers. HR 1890 would provide more money for to protect land in permanent easements and reward farmers for carbon sequestration. Chellie Pingree of Maine introduced an amendment to expand supports to organic farmers.

In a political landscape hostile to environmental protection, agricultural lobbies have for decades found ways to pilfer conservation budgets to help boost crop and livestock production. Over the last ten years alone, according to the Environmental Working Group, two billion dollars in the Environmental Quality Incentives Program have been diverted to pay for the hard costs of establishing waste containment structures for concentrated animal feeding operations, laying pipe for irrigation in arid regions, and draining wetlands.

Like the Olympic Games, the renewal of the Farm Bill only comes around every four to five years. It offers the opportunity for Americans to invest in the long-term health of farmlands and the countryside. But time may be running out.
Could this year be a turning point for Farm Bill conservation reforms, like the 1985 and 1990 Farm Bills, which established far-reaching efforts to protect grasslands and wetlands across the heartland?
Posted by Dan at Tuesday, June 04, 2013 No comments: Links to this post