Giving Thanks: Honoring Your Food Animals Over the Holidays

The end of year holidays are times when families gather around their tables, sharing meals and company, often organized around the cooking of a turkey, ham, or roast. During the three-month feasting period between Thanksgiving and the Super Bowl, we whip cream to dollop on pumpkin pies, sip egg nog, share breakfasts of eggs, bacon, sausage, cream cheese and lox. What many people may not realize, is that the many animals that we depend on for holiday meals and snacking, can be the victims of harsh suffering and tremendous environmental degradation. It doesn’t have to be this way.

Consider the Thanksgiving turkey. The bird that the pilgrims sat down to enjoy on those original Thanksgiving gatherings was wild and native to the continent. Today’s conventional turkey is an industrial creature, the Broad Breasted White, bred to grow at a freakishly fast pace, raised on grain inside massive barns where their quality of life is severely compromised. In fact, male turkeys, or Toms, now grow so big so fast and are so breast heavy, most can barely stand up. Natural reproduction is out of the question. The industrial turkey is a totally manmade construction, dependent on artificial insemination. Often times to add flavor to these industrial birds, the meat is injected with vegetable oils, saline solutions, or animal proteins.

A similar factory-like scenario applies to most of the animal food products Americans buy around the holidays: cows, pigs, and chickens. An increasing majority of animals in the U.S. and other countries are raised in factory farms or CAFOs (concentrated animal feeding operations.) These enterprises are not the family farms of past times, with pigs rolling in the mud, cows grazing in pastures, and roosters crowing from fence posts. CAFOs are industrial-scale facilities where vast numbers of animals are confined, kept on life support with antibiotic medicines, and generate an output of sewage or waste comparable to a small metropolis.

The good news is that alternatives to this tragic animal factory scenario are out there and you don’t have to be a vegetarian to participate. (Though that certainly is an option.) Farmers around the country are increasingly turning toward better methods of livestock production. They are raising rare heritage breeds of turkeys on pastures where the birds grow more slowly and eat a more natural diet and are part of a local food economy. Many producers now raise animals without antibiotics and growth hormones, essential tools in industrial CAFO production. A number of organizations have standards for organic production and animal welfare. Many cooks are featuring a lot more grains and vegetables with perhaps smaller portions of higher quality, sustainably sourced meats, dairy, and eggs.

Knowing your farmer and understanding the conditions under which your food was grown is a profound way of giving thanks that also includes the raising of the animals that do so much to enrich our holiday celebrations. It could also lead to some of the most satisfying meals you’ve ever shared.

Posted by Dan at Friday, November 19, 2010 No comments: Links to this post

Down on the Factory Farm: The Lower Yakima Valley 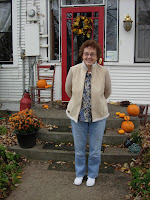 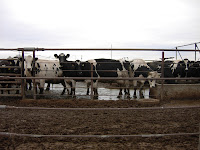 With a slate gray sky threatening rain on an early November day, I drive up to the Lower Yakima Valley to meet anti-factory farm activist Helen Reddout. She is the founder of Community Association for Restoration of the Environment (CARE), a group that has battled industrial dairies in southeastern Washington State for over 15 years.

An older woman of smallish stature, Reddout doesn’t look like your typical public defender (if there even is such a thing). She is in fact a farmer and still runs the cherry business she started with her husband many decades ago.

But it only takes 5 minutes for me to realize that Reddout has done a lot of homework and is not afraid of confrontation. In the mid-1990s, she explains, as we pile in the car to start our tour, an influx of mega-scale dairies, primarily from southern California, tragically transformed a valley with a diversity of small family farms into a toxic nightmare. At first she thought the agencies would deal with the perpetrators and the sewage that immediately began to overwhelm her rural community. One day she realized that they weren’t going to take action and began to fight back.

The remnants of that former patchwork of diversified agriculture are still visible in the Lower Yakima. Feathery fields of asparagus now golden and red, the heavy bushes tilting towards winter dormancy. Orchard blocks of cherry, apple and pear trees. Stubble and angled stalks from fields of feed corn now harvested. Increasingly what we see dominating the farm economy here, however, are huge operations with very large concentrations of black and white Holstein dairy cows.

The cows are not out grazing in the green rolling pastures. Some operations have shiny aluminum siding, cement floors, and stall systems that stretch on for hundreds of yards like municipal airport hangers. At others, the cows are confined in open corrals on vast manure and muck lots, spending the day walking and standing in their own waste. Adjacent to all these pens and enclosures are manure cesspools of all kinds. There are concrete holding tanks, unlined lakes brimming with sewage, massive pits carved into the earth waiting to be filled. There are more than 200,000 cows on the 70-plus CAFOs in a 19-mile corridor in the area, estimates Reddout. But she encourages me to call around to the local agencies, because she says even they don’t know how many cows are actually in the valley anymore.

At approximately 125 pounds of waste per cow per day, you begin to get the brutal picture of what it’s like to have your community taken over by industrial dairies. It seems as if you combined all the liquid waste from the dairies we drive by, it could easily fill a stadium. Manure is being sprayed on surrounding fields through large central pivot irrigation booms and smaller manure cannons, pumped from one holding area to another. As the storm touches down, the shit smeared fields begin to glisten in the rain. The waste enters my senses through a variety of pathways: burning nose, throbbing temples, nauseous stomach. One can easily imagine manure ponds overflowing, fields saturated, and waste literally running into ditches and along roadsides. No wonder property values have plummeted and real estate sales have stalled out. Many residents couldn’t move even if they want to.

The entire system seems to be predicated on organized negligence. There is clearly both too much waste and too much milk. Reddout tells us that with the national glut of milk, much of the output here will be exported or dehydrated or made into cheese. Meanwhile the kids in the local schools are at risk of their water supply being contaminated by e.coli or nitrates. Most of the small dairy farmers have been driven out by the big corporate dairies who concentrate more animals on their lots for ever-diminishing returns on bulk milk prices. Starlings and magpies flock around these operations, becoming unwitting transmitters of mold and bacteria around the community. Then there is the issue of replacement calves. In order to continue lactating, milk cows must be impregnated every year. Half of the calves will be male and have little economic value. At the end of our tour we pass a hovel of plywood containment huts where male calves are tethered for veal production. Through small cutouts in the wood, you can see the eyes of a few animals staring out.

In 2002, CARE was awarded a $1 million decision against a local dairy operator for violations of the Clean Water Act. Half the money went to the Western Environmental Law Center in Eugene, Oregon, the legal defenders who took on the case; the remainder went to an organization that conducted an extensive study of well and groundwater quality throughout the entire valley. Meanwhile the fight goes on and the industry searches for ways to expand the number of cows in the valley.

The latest scam involves raising millions of dollars in public funds to install industrial digesters on top of the waste pits that capture methane gas for energy conversion. It’s a concept sold to the public as a green energy solution, even if the millions of taxpayer dollars invested may never be recouped, and nitrates may still pollute the environment, and the industrialization of the dairy cow will continue.

Before I head back to the safety of my own community, I ask Helen Reddout what she wants. Without hesitation, she tells me she wants the dairy CAFOs to leave her community for good and for family farming to return to the Lower Yakima. The routine use of antibiotics whether animals need them or not, she argues, should be stopped, as it leads to the proliferation of antibiotic-resistant pathogens that threaten human and animal health. She wants the federal subsidies that provide cheap grain to CAFO operators and other taxpayer supports eliminated. And she wants to see any remaining dairies to follow the lead of her neighbor Allen Vourtman, who grazes 350 cows on pastures next to her home, and takes the welfare of his cows, and their impacts on the health of the local environment very seriously.

From what I've seen, Helen Reddout doesn’t seem to be asking too much.
For a great article on the dairy industry and the USDA from Pulitzer Prize winner Michael Moss, read this piece in the Nov. 6, 2010, New York Times.
Posted by Dan at Thursday, November 18, 2010 No comments: Links to this post